I’ve always been a huge fan of science fiction and similarly speculative works. There’s nothing more intriguing than reading about, or watching a film focused on, a reality that is somehow different than the one we live in. The creative deviations to the reality we know that can often be found in science fiction challenges us to think in brand new ways.

I recently finished The Last Policeman trilogy by Ben Winters. Amazon recognized the first novel as one of its Best Books in July 2012, and it had been on my to-read list for quite some time. When I finally picked it up, I told myself that I’d put it down if it didn’t grab my attention. I was hooked after just a few pages. 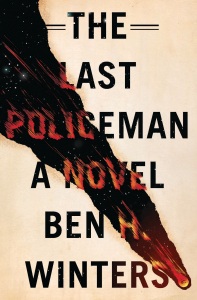 The Last Policeman grabbed my attention with its subject matter, fascinating story lines, and vivid descriptions of a pre-apocalyptic America. An asteroid is going to hit Earth in a matter of months (stay with me, now – this is an important time to engage in the suspension of disbelief), and society is deteriorating. It plays with this essential question:

Why should we maintain any semblance of civilization, or invest in the common good, when it’s all going to end soon?

The main character is a policeman, and he has no real reason to stop being, well, a policeman. In a religious context, we’d say his love of law and order was being lived out in his vocational call. For our protagonist, this call was so firm, so sure, that he is going to literally live it out until the end of life on Earth.

Winters captures the malaise, dread and hopelessness pervading this society and vividly describes how it increases with each passing day as the international countdown to destruction continues. He also does a spectacular job of discussing how different areas of society – law, religious sects, family units, etc. – responding to the impending end of the world.

I was, of course, always fascinated with his depictions of religious groups.

Winters was a helpful voice for me to read, because the religious world wasn’t at the forefront of the main character’s existence at all. It’s not as if they didn’t exist but they were peripheral. Some religious groups were slightly helpful to the main character; there were groups that went around and collected abandoned children, since so many adults committed suicide as the end approached. These religious groups (presumably) gave children homes, food, shelter and care and earned some amount of appreciation from our protagonist.

But for the most part, religious groups were fighting amongst themselves, or turning into cults, looking inward, and not engaging with the rest of the world that was in total and utter crisis. Several had a lot to say (especially when mass communication was still functional) but they didn’t offer any spiritual hope or the tangible support needed in this wildly reeling world. Religious groups simply weren’t that important to him. They didn’t provide any value or relevance to his life.

In the real world, as far as we know, there isn’t an asteroid hurtling towards Earth. But, society is still deteriorating in many ways, – the collapse of our environment, the inability to properly distribute food and medical care across our globe, the destruction of individual personhood through systematic racism, sexism and hetero-normative worldviews.

Our religious communities, in the very-real-non-science fiction world, have a choice to make.

We can choose to constructively engage in conversations and take actions that show an investment in the future. We can work to offer a lucid, hopeful, and practical vision for the world in partnership with others.

Or, we can engage the challenges of the day by burying our heads in the sand and arguing over details, while the rest of the non-religious world observes our dramatic internal bickering, shrugs, and turn away to find the organizations and people who are working to make a better future today.

The work churches engage in is important. Sometimes. But if you’re a church person (and I admit, I am a “company woman”), you and I need to consider that the secular world really doesn’t care about what we are muttering about over there in our little churches and corners.

Unless we demonstrate that we can offer relevant voices and become active agents in social change, we will increasingly find that we no longer will have a place at the adult table.